Proton Therapy was practiced the first time in 1954 at Lawrence Berkeley Laboratory in California (USA). In the following years, Proton Therapy was introduced in Uppsala (Sweden), Harvard (USA) and at the Paul Scherrer Institute (PSI) Villigen (Switzerland). There is over 50 years of experience now in Proton Therapy.

Proton Therapy is now the most advanced method to irradiate tumours. It utilizes accelerated the nuclei of hydrogen as a particle beam. The selected energy of the beam (measured in MeV = Mega Electron Volts) determines the range of the protons in tissue, maximum 32 cm at 250 MeV. The maximum of the dose delivered (kinetic energy transferred) to the tissue is at the end of the range, the so called Bragg Peak.

Comparison of the depth dose curve for conventional radiation therapy (15 MeV x-rays), a single proton beam (200-MeV protons) and a spread out proton beam (dotted line) for a target area found at a depth between 15 and 25 cm. The hatched area corresponds to the dose of radiation which can be spared by the use of protons compared to conventional X-ray radiation. (From: Arthur L. Boyer, Michael Goitein, Antony J. Lomax, and Eros S. Pedroni, Radiation in the Treatment of Cancer; Physics Today, September 2002). 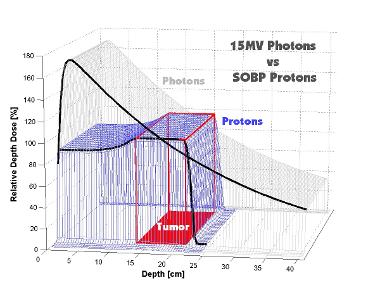 The method is used particularly with patients for whom a conventional radiation therapy is not indicated because the tumour is located in the near vicinity of a radiation sensitive organ. With the help of proton therapy it is possible to achieve selective destruction of malignant cells and to significantly reduce the radiation dose outside the tumour. This is particularly important for young patients (including children), this highly protecting treatment saves these patient’s life quality.
You are kindly invited to obtain more information on the various treatment options for cancer and on the advantages, history and development of proton therapy.

Proton therapy is currently regarded as the next logical step in the improvement of radiation therapy. The successful radiobiological concepts of conventional radiation therapy can be adopted. Proton Therapy is far superior to X-rays because of the radio physical properties, which means the undisputed better physical dose distribution due to the fact that protons do not penetrate the whole body but stop at the target volume.

Comparison of dose distributions of intensity modulated proton therapy IMPT on the left and intensity modulated X-ray therapy IMXT on the right. (From: A.J. Lomax, M. Goitein and J. Adams, Intensity modulation in radio-therapy: photons versus protons in the paranasal sinus; Radiotherapy and Oncology 66, 2003, 11 - 18).
Conformal irradiation of a target volume by means of a scanned Proton Beam. (Source: PSI)